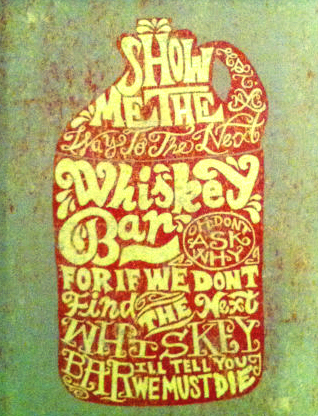 I’ve never been big on groups. I’m sure it’s because of my family of origin, but I get skeptical whenever anyone invites me to be part of any organized, regular gathering—I assume some nasty group dynamic will eventually arise, or groupthink will quickly set in.

As a result, I didn’t last very long in AA. I stopped drinking, though.

I’ve been sober since September 17th, 2005. I remember that morning: I woke up supremely hung-over in a situation I hadn’t expected, recalling very little of the night before. I know I’d been in a lesbian bar in Los Angeles. I know a friend saved me from doing some extremely stupid and potentially life-altering things.

I used to be the one in clubs who “watched” drinks while my friends danced. They’d come back to find all the glasses on the table emptied, whether they held cosmos, vodka, or beer. My weapon of choice, however, was whiskey—Jack Daniels, from the bottle.

During my time of regular weekend night intoxication (and many weekend days during college), I engaged in all sorts of daredevil activities. Here are just a few of the many, many examples:

In other words, I had a blast.

The thing is, alcohol is amazing. It’s legal, cheap, and easily accessible. Being drunk was incredibly freeing and otherworldly, to the extent that I could do just about anything I wanted and think it was okay. It made me comfortable around women, as I’ve mentioned.

My inebriated party lasted for somewhere around 17 or 18 years before I realized that once I started drinking, I couldn’t stop. It was starting to affect my relationships. My blackouts became more frequent. I was a parent now and after seeing how my father acted while drunk when I was a kid, I couldn’t bear the thought of bringing the same stuff into my new family. And, being an aging, lonely alcoholic didn’t sound very attractive.

Still, once I admitted to myself that things would only get worse if I continued drinking, what did it feel like to identify as an alcoholic?

I know there can be a self-perpetuated social stigma to this label. I had trouble with it and still do, partly because I no longer drink. I have a greater desire to binge on sugar than to accept an offered alcoholic beverage. As for AA—half of the handful of meetings I attended felt like gay pickup scenes. The others just weren’t for me, the group-averse skeptic. In the end, I cozied up more to the identity of health nut, reducing my intake of sugar, exercising, and eating organic fruit and veggies, whole grains, and grass-fed things. If I was cutting out alcohol for my health and well-being, I was going whole hog, dammit.

Once again, like so many other times in my life, I bounced back (and not just from car hoods). Resilience extended to jumping on the wagon. To his great credit, my father did the same thing, kicking his alcohol habit in time to ensure I had just a messed-up upbringing, instead of messed-up and fatherless.

I still love alcohol, just not having it. I like being around drunk people; just because I don’t drink doesn’t mean they can’t have fun. I often volunteer to be designated driver. Life’s too short to not appreciate those who can get away with something.

So let’s raise a glass—to identity, resilience, sobriety, and alcohol.