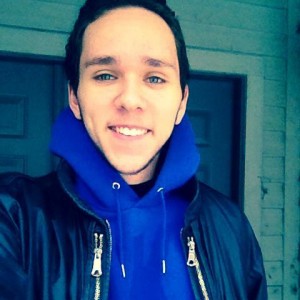 During the 1989-1990 school year at Stanford University, I took Adrienne Kennedy’s playwriting class. We’ve been in touch ever since. Now, her grandson Canaan has written a book on his family, and I’m not only helping with the Kickstarter campaign, but I asked him a few questions about the project.

What’s the name of your book, and what is it about?

The title of my book is Struggles to Victory – Over Racism in America. This book is about my family’s experiences with being black in America and dealing with the racism that came with it. Ever since I was little, my family would tell me stories of the difficulties they faced in life because of the color of their skin. This book contains interviews from my father, my grandmother, and my grandfather. My father’s story explains his incident with the Arlington Police Department, when he was unlawfully beaten outside of his home in Arlington, Virginia. The interview explains this traumatic event and how he overcame this to write the play Sleep Deprivation Chamber, which went on to win the 1996 Obie Award for Best New American Play.

My grandmother’s interview tells her stories of attending Ohio State and traveling the world as she began her journey of becoming a playwright.

My grandfather’s interview explains his life and his co-founding of Africare, a non-profit organization committed to aiding people of Africa.

At 17 years old I wanted to record their lives into the form of a book so that people could gain insight into being black in America. What makes these stories so great is the fact that they were able to overcome racism and achieve their dreams. I’ve always been interested in how people overcome difficult obstacles and situations in life because ultimately overcoming obstacles, turning struggles into victories is what life is about. Understanding how people overcome adversity to achieve greatness is what I want to be able to mimic.

What was your process for creating it?

Well, I had this epiphany one day that made me want to sit down and write a book about my family. It was during the summer, it was a hot day, and this idea to write a book just came to me. I can remember writing about the process actually and on one occasion I wrote, “Well I’m writing a book and I have about seven pages.” It was a long process. I spent hours reading, researching, and conducting interviews and then transcribing them. Many hours were spent editing the transcriptions because they didn’t come out that well. I really immersed myself in the book because I really enjoyed doing it, and creating something of my own about something I care about was really wonderful. I can’t wait until it’s finished because then I can start to work on my next project.

The audience is young adults who are trying to navigate life. The stories can teach me lessons about how to overcome difficult times.

What do you hope people take away from it?

With everything going on from Michael Brown to Eric Garner, I hope that people can get a better understanding of being black in America. I just want people to know about my family and what they had to go through. I was always proud of my family stories and found them very interesting, and I hope that people will be intrigued and fascinated too.

Who are some of your influences?

In my room I have posters of Malcolm X, Patrice Lumumba, Nelson Mandela, John F. Kennedy, Mahatma Gandhi, Julius Caesar, Ramses, and Alexander the Great. My father taught me about these people who strived for greatness, who wanted to change the world. These are my icons because I too want to be great. These were all great men and their ability to command and lead people is why I respect them. All of these people understood that greatness is not built in a day, it is about the amount of everlasting effort you put into it.

Check out the Kickstarter project at https://www.kickstarter.com/projects/mbreauxsia/struggles-to-victory-a-book-by-canaan-kennedy, and share your own stories of victory on social media using the hashtag #StrugglesToVictory.