Since we’re living in such a post-racial society, and because of the enlightened Obama protest in Arizona where people held signs that said, “47 percent Negro” and “Impeach the Half-White Muslim!”, Cinemulatto thought it’d be appropriate to check in with our racist Arizonan pen pal.

I totally saw you in the news! Or, I think it was you. You were holding an “Impeach Obama” sign. That was you, right?

I know it’s not my turn to write. I just got so excited to see you in national news, I decided to give you a freebie.

First off, I was thinking of how lucky we were to meet in The American Conservative blog comments. My life has changed for the better since that fateful, high-web-traffic afternoon. Thanks for letting me be your troll!

I understand you’ve been having a hard time. This is also why I’m writing. Quite frankly, I’ve figured something out—I think your current bout of depression may be related to you being kind of a shitty person.

Don’t take that the wrong way. We all have our better moments and our better selves. And I use it to preface a few words of wisdom I’d like to pass along.

I know, I know—I’m always giving you advice. It’s the liberal in me! This one’s great, though. I happened to be thinking about business intelligence. Call it a byproduct of San Francisco gentrification. What’s business intelligence? It’s taking a bunch of data and seeing if the numbers tell you anything about your organization. Think of it as a way to maintain a competitive advantage. It’s basically using information to get ahead in business.

My advice to you: hone your racial intelligence. It’s using information to get ahead in life.

I can appreciate that you’re undereducated. I don’t fault you for that. You know I respect someone who’s at least trying. There wasn’t a single typo on your protest sign. I’m so proud of you.

Still, I have a few things to point out based on what I heard about the Desert Vista High School protest. I think you made a few incorrect assumptions about race. And song lyrics.

First off, by chanting “Bye Bye Black Sheep”, folks weren’t doing justice to the sheep, and may have inadvertently humanized Obama. The “black sheep” from the song was actually quite generous, compassionate, and respectful (three bags full of respectful!). Review the words and you’ll see.

I should also let you know: Obama isn’t Muslim. But, if he were, that’d be okay. I know how much you love the Constitution (we have so much in common!). We’re both aware that “A well regulated militia being necessary to the security of a free state, the right of the people to keep and bear arms shall not be infringed.” Did you know, however, that “Congress shall make no law respecting an establishment of religion, or prohibiting the free exercise thereof?” Thereof means of the thing just mentioned. Just so you know.

I hope you find this helpful. And please let me know how things are going. Did you remember to wear sunscreen to the protest?

Always thinking of you,
Cinemulatto

MULATTO OF THE MONTH: PAULI MURRAY 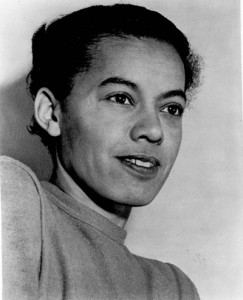 The first black woman to be ordained as an Episcopal priest, Pauli Murray was mixed with Irish, Black, and Native American. Hospitalized twice for bad breakups with women, her “inverted sex instinct” was as bold as her feminist writings on the Civil Rights Act of 1964.

Check out the project dedicated to Pauli Murray, and remember there are currently more humanitarians than racists.